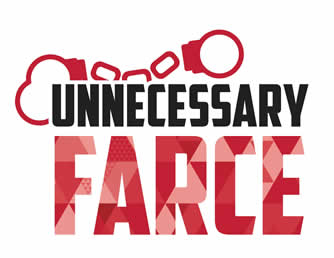 "Two cops. Three crooks. Eight doors. Go." In an economy motel room, an embezzling mayor is supposed to meet with his female accountant. In the room next door, two undercover cops are supposed to catch the meeting on videotape. But there's some confusion as to who's in which room, who's watching the video, who's taken the money, who's hired a hit man, and why the accountant keeps taking off her clothes. Unnecessary Farce is filled with doors slamming, clothes flying, and bagpipes bleating, all of which adds up to an over-the-top tale of mix-ups and mayhem that’s laugh out loud funny from start to finish. Rated PG-13.