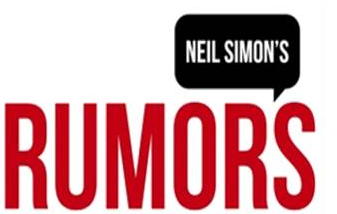 “Rumors” is a farce which takes place in the upscale home of New York City’s deputy mayor, Charley Brock. Charley and his wife, Myra, have invited friends to a party there to celebrate their 10th anniversary, but before the party begins, Charley has suffered a gunshot wound to the earlobe which may or may not have been self-inflicted. Myra is nowhere to be found. As guests arrive, each learns of the situation but tries to keep it hidden from the next guest to arrive. As the play progresses, the guests share rumors about the party’s hosts and about each other. What will happen when the police arrive? Come see this comedic tour-de-force and find out! Show dates are February 27 through March 15, 2015.

LANGUAGE: Rumors contains a significant amount of strong language, including the repeated use of both profanities and vulgarities—language that would qualify the play for an “PG-13” rating if it were a movie.