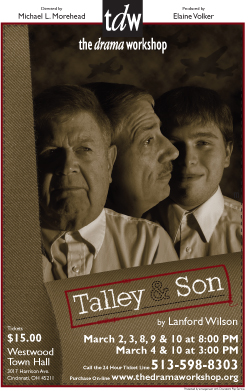 The time is Independence Day, 1944, the place the parlor of the Talley homestead in Lebanon, Missouri. As World War II rages across the seas, the Talleys are beset with crises of a different sort. Slipping into senility, the elder Mr. Talley still has flashes of explosive lucidity, when he schemes to dispose of the local bank among heirs of his own choice, and berates his charming but spineless son, Eldon, for considering the sale of the family garment business to an eastern conglomerate. Also involved in the bickering are Eldon’s long-suffering wife, Netta; their son, Buddy, who is home on leave from the Army; his vapid wife, Olive; and Eldon’s sister, Charlotte, a defiantly free spirit who is suffering the fatal effects of radium poisoning. And, commenting on the action, unseen by the others, is the “ghost” of the second son, Timmy, already a casualty of the Pacific war, although the family has not yet learned of his death. In the end the petty antagonisms, scandals and selfishness which infuse the play are their own reward, and we are aware that a dynasty built by hard work and clear if conniving vision is about to be dismantled by lesser men who have inherited the property, but not the character, of their predecessors.