Messiah on the Frigidaire 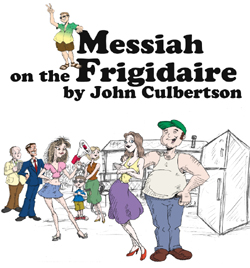 Messiah on the Frigidaire
by John Culbertson
Directed by Jef Brown

This comedy explores the foibles of the human condition when Lou Ann Hightower and her best friend, Betsy Grigsby, notice the face of Jesus appearing on the refrigerator in the trailer Lou Ann shares with her husband, Dwayne, in Elroy, S.C. Dwayne Hightower is a get-rich-quick kind of schemer, and he thinks the women’s visions are a great way to make money. Pretty soon, the national tabloids have picked up the story, and the trailer park becomes a target for all sorts of miracle seekers, politicians, and evangelicals, some of whom have decidedly nonreligious agendas. In the midst of the chaos, Lou Ann, Betsy, and Dwayne have to reassess their feelings about each other and their lives.