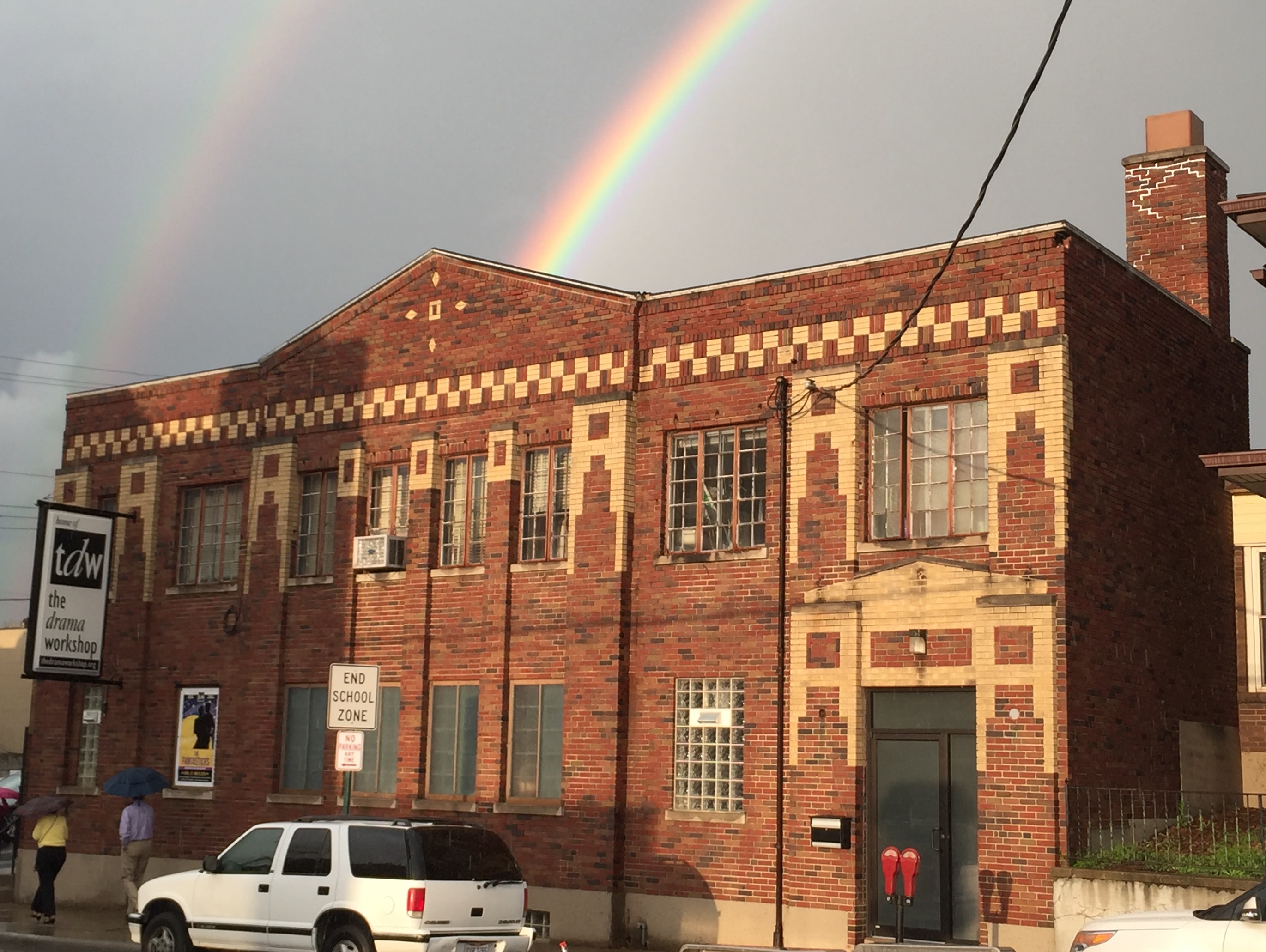 The Drama Workshop’s 96-seat theater now has five shows in production at once. Auditions for upcoming productions are happening now. Eric Thomas image.

The Drama Workshop is a Very Busy Place

(Cheviot, OH) The Drama Workshop continues to work at a break-neck pace bringing great theatre to Cincinnati’s West Side. The historic brick building at the corner of Glenmore and Gamble in the heart of Cheviot is buzzing with activity nearly every night.

In addition to its ongoing run of the classic comedy, “Noises Off”, continuing through August 28, TDW is holding auditions for two upcoming productions, rehearsing a third, and preparing to participate in the Ohio Community Theatre Association State Festival.

The Drama Workshop will be holding auditions for selected roles in the holiday musical “Nuncrackers” by Dan Goggin on Tuesday 8/16 & Wednesday, 8/17, 7-10 pm at The Glenmore Playhouse. Thursday 8/18 will be reserved for callbacks if needed. Sign up times are required. Those interested are encouraged to sign up at http://www.signupgenius.com/go/10c0449a9af23a75-nuncrackers.

The performance dates for “Nuncrackers” are December 2 – 18, Fridays and Saturdays at 8:00 PM, Sundays at 2:00 PM. Additional dates may be added.

Open auditions for the classic Neil Simon comedy “The Odd Couple” will be held on Wednesday, August 17 and Sunday, August 21. Doors will open at 6:30pm, and auditions will begin promptly at 7pm. Actors are asked to bring a resume and headshot, and will audition in groups. Auditions will run no later than 9 pm, and may end earlier. The director is seeking eight actors. Needed are 6 men (ages 40 to 60) and 2 women (ages late 20s-early 30s). Performers of all ethnic and racial backgrounds are encouraged to audition.

Rehearsals for TDW’s next show, James Goldman’s “The Lion in Winter,” have also begun. This tale of intrigue takes place in the court of England at Christmas 1183 – as King Henry tries to ensure his kingdom’s survival, his three feuding sons, the scheming Queen Eleanor, and the opportunistic King of France all want a piece of it. Also a classic feature film starring Peter O’Toole and Katherine Hepburn, TDW’s production of “The Lion in Winter” opens on October 7 and runs through October 23.

Finally, TDW is deep in preparations to participate in the Ohio Community Theatre Association State Festival. This festival includes theatre groups from all over the state, and will take place in Independence, Ohio, over Labor Day weekend. TDW was selected as one of three invitees from the Cincinnati area to perform an excerpt of last season’s award-winning farce, “Unnecessary Farce”. This festival also serves as the Ohio competition to participate in the national-level American Association of Community Theatres play festival.

To order tickets to any upcoming production, please either order online at www.thedramaworkshop.org, or via the 24/7 ticket line at 513.598.8303. All auditions and performances are at The Glenmore Playhouse, 3716 Glenmore Ave, Cheviot, 45211.

TDW is open to all people who are interested in theatre, and no skill is required. There is activity at the playhouse most weekends. For more information on how to get involved in this vibrant community organization, please contact TDW through the ticket line, via the website, or on Facebook.