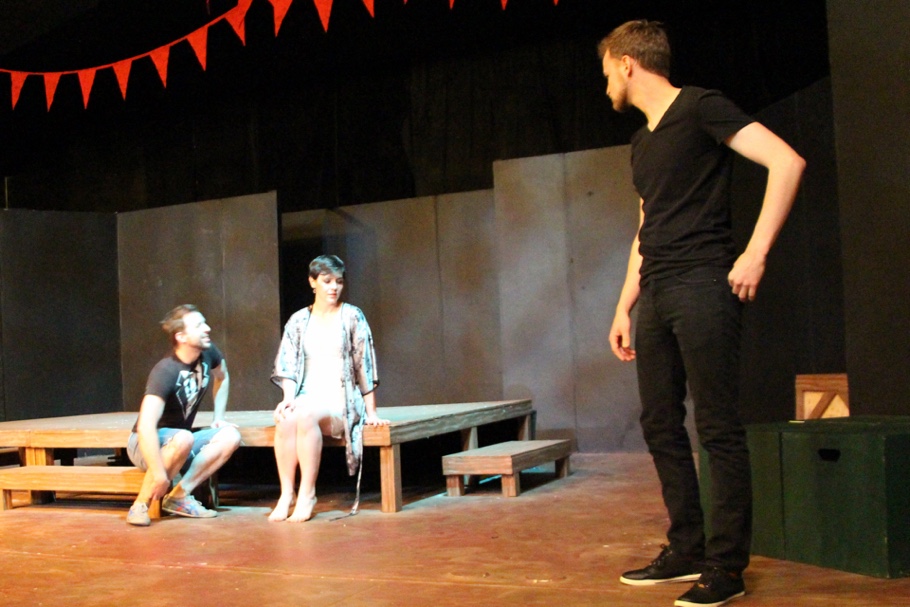 Brady Reilly as the Burglar, Betsy Bossart as Penny, and Craig Branch as Darryl appear in ‘Breaking and Entering’ by AK Forbes in one of the 6-pack of shows in TDW’s ‘Home Brew Theatre’. Image provided by The Drama Workshop.

(Cheviot, Ohio) The Drama Workshop is thrilled to present HOME BREW THEATER, an event featuring six new plays and locally brewed beer May 20-22. Performances will be May 20 and May 21 at 8 pm, and May 22 at 2 pm at The Glenmore Playhouse, 3716 Glenmore Ave, Cheviot. All proceeds benefit the Glenmore Playhouse Fix-the-Roof-Fund.

This exclusive program features six short plays by six local playwrights. Each performance will be followed by a reception for ticketholders with beer provided by the Christian Moerlein brewery.

The Six Plays are:

BREAKING GULF NEWS, by Phil Paradis, has a big oil CEO facing off with the United States Coast Guard on a national news broadcast.

LIFE COULD BE A DREAM, DOC, by Clint Bramkamp, details the experiences of a writer seeks professional help, where everything may not be exactly as it appears.

BREAKING AND ENTERING, by A. K. Forbes, shows what happens when a couple tries to spice up their marriage with a little role playing.

A SILLY AFTERNOON IN FRANCE, by Andy Simpson, takes place in a sidewalk café with two exceptionally civilized patrons.

THE OFF CHANCE, by Teri Foltz, explores the chances of a horoscope really coming true.

THANK YOU, by Roger Brookfield, focuses on an older couple musing on their neighbors’ tryst.

Seating is limited, and reservations for this unique event are strongly recommended. Tickets are $10 each, and may be ordered by phone at (513) 598-8303 or purchased online at www.thedramaworkshop.org.