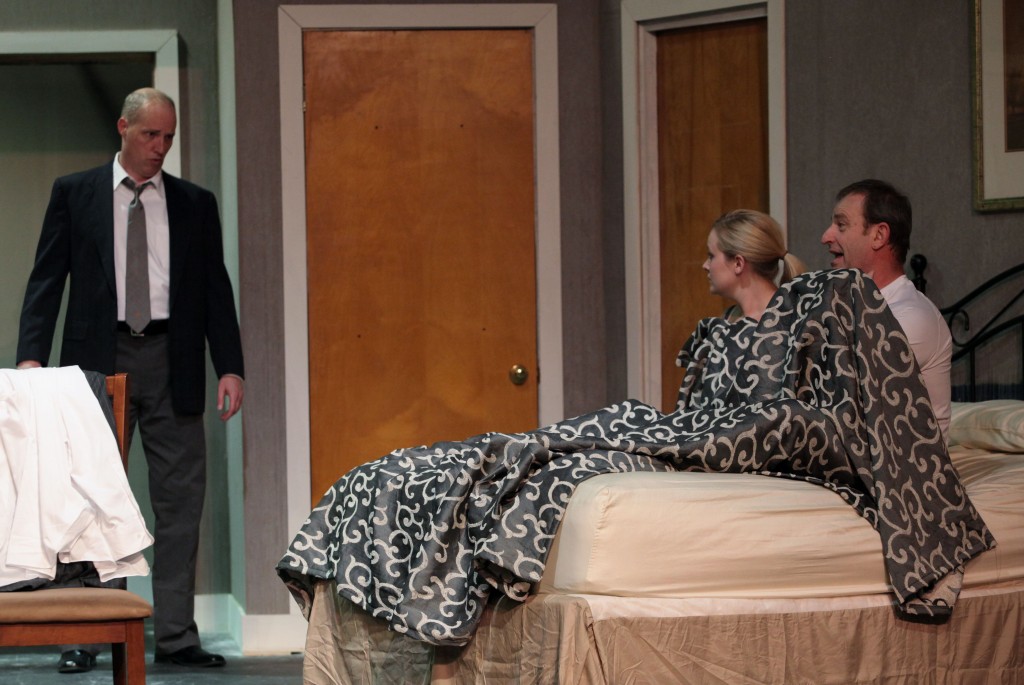 (Cheviot, OH) The Drama Workshop’s production of the hysterical comedy, UNNECESSARY FARCE, opens February 26, and will run through March 13 at The Glenmore Playhouse, 3716 Glenmore Ave in Cheviot. The show offers Friday and Saturday evening performances beginning at 8:00 pm, and Sunday matinees starting at 2 pm. This door-slamming farce is a sure-fire way to chase away those winter blues.

In an economy motel room, an embezzling mayor is supposed to meet with his female accountant. In the room next door, two undercover cops are supposed to catch the meeting on videotape. But there’s some confusion as to who’s in which room, who’s watching the video, who’s taken the money, who’s hired the Scottish hit man, and why the accountant keeps taking off her clothes. UNNECESSARY FARCE is filled with doors slamming, clothes flying, and bagpipes bleating, all of which adds up to an over-the-top tale of mix-ups and mayhem that’s laugh out loud funny from start to finish.

The farce is a form of theatre that is difficult to do well, and it has stretched the cast in new ways. “This has not only been a great experience but a big challenge for me,” said Meagan Blasch, who travels to Cheviot from Oakley to play accountant Karen Brown. “I knew the moment I read the script that I wanted to be a part of this production, but I had no idea how challenging it would be. The cast and crew had made it an even better experience- I can’t imagine doing the show with anyone else!”

Joe Ward, a TDW veteran, appears in UNNECESSARY FARCE as the clueless Mayor Meekly. “ I’ve been watching rehearsals for more than a month now,” he offered, “and I’m still laughing out loud every time. I feel like I’m getting a free show every night!”
Ms. Blasch agrees wholeheartedly. “We frequently crack each other up during rehearsal- I’ve been known to snort once or twice!”

Fairfield resident Kevin Noll plays the hit man, Todd, and loves the camaraderie of doing a show. “The way everyone has come together has been an absolute blast. This is going to be as much fun for the audience as it has been for the cast.”
Tickets for UNNECESSARY FARCE are $16 each when ordered in advance, or $17 at the door. Shows at TDW frequently sell out, so advance reservations are strongly recommended. Tickets may be ordered by phoning the TDW 24/7 ticket line at 513.598.8303, or by ordering online through the TDW website at www.thedramaworkshop.org.