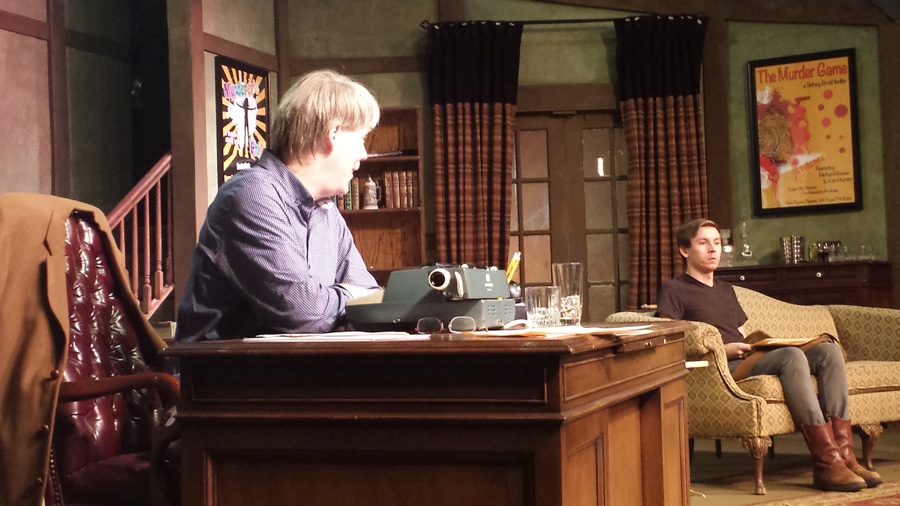 Cynthia Mottel, Dennis Murphy, and Robert Macke work their way through the twists and turns of DEATHTRAP, running October 23 through November 8 at The Drama Workshop. Image: Elaine Volker

(Cheviot, OH) The Drama Workshop is pleased to present the classic comedy-thriller DEATHTRAP, by Ira Levin, at The Glenmore Playhouse at 3716 Glenmore Ave in Cheviot. The show runs from October 23 to November 8, 2015; Friday and Saturday evening performances begin at 8 pm, and Sunday afternoon performances start at 2 pm.

World-famous thriller playwright Sidney Bruhl (Dennis Murphy) is suffering from a chronic case of writers’ block. When one of his former students (Robert Macke) shows up at his doorstep with what might be the next Broadway hit, Sidney and his wife Myra (Cynthia Mottel) concoct a deadly plan to make the manuscript their own. Holding the record for the longest running comedy-thriller on Broadway, DEATHTRAP is filled with twists and turns in a series of thrilling events that will keep you guessing on the edge of your seat until the very last moment!

In 1982, the play was made into a hit motion picture starring Michael Caine, Christopher Reeve, and Dyan Cannon. TDW’s production is helmed by award-winning director Joe Penno, and is produced by Ray Persing. In addition to Murphy, Macke, and Mottel, the cast features the talents of Anne Wrider and Bill Keeton.

DEATHTRAP includes some violent content and adult situations, and may not be suitable for younger patrons.

Tickets for DEATHTRAP are $16 each when ordered in advance, or $17 at the door. Shows at TDW frequently sell out, so advance reservations are strongly recommended. Tickets may be ordered by phoning the TDW 24/7 ticket line at 513.598.8303, or by ordering online through the TDW website at www.thedramaworkshop.org.