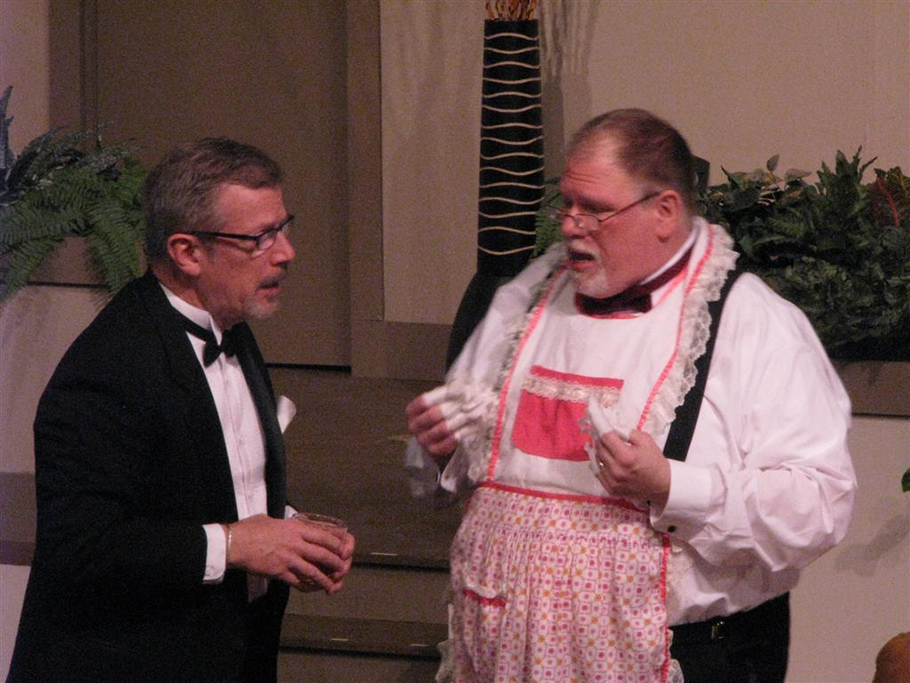 (Cheviot, OH) The Drama Workshop, the award-winning community theatre based at The Glenmore Playhouse in Cheviot, is pleased to present Neil Simon’s RUMORS from February 27 through March 15.

Charley and Myra Brock are celebrating their 10th anniversary and have invited all their good friends. Chris and Ken Gorman are the first ones to arrive, but find that Myra is missing and Charley has “accidentally” shot himself in the ear. Charley is unconscious and so unable to tell them what happened. Charley is the deputy Mayor of New York City – so Chris and Ken try to help their host avoid a scandal by covering up what they assume to be the truth of the situation. As more friends show up to the party, the story of Charley and Myra’s anniversary evening gone awry grows and develops, providing a rich basis for great characters doing what Neil Simon does best – making the mundane…insane!

The show is headed up by director Julie Jordan, who helmed TDW’s acclaimed production of CAT ON A HOT TIN ROOF, and award-winning producer Elaine Volker.

Ms. Jordan has a long relationship with this particular show. “In 1992, The Drama Workshop held auditions for RUMORS. I didn’t know a lot about the play at the time, but I read for it and got cast as Cassie,” she explained. “I loved the play so much that I directed it several years ago for a local high school. Now, I have come full circle.”

Playing Cassie this time around is Jennifer Richardson. While Jennifer is appearing in her first show with The Drama Workshop, she’s no stranger to theatre, having been involved with various groups for over 20 years. During the day, she is speech-language pathologist at Midway Elementary.

Jennifer’s experience is matched by the rest of the cast, who come to perform in Cheviot from as far away as Madeira and West Chester. The cast is a veritable “Who’s Who” of Cincinnati theatre, featuring Robert Weidle, Kristy Rucker, Bill Keeton, Jennifer Richardson, Fred Hunt, Megan Schultheis, Gretchen Gantner, Ian Tinney, Joe Ward, and Eric Day.

Neil Simon’s RUMORS runs February 27 and 28, and March 1, 6, 7, 8, 13, 14, and 15th. Show times are 8 pm on Friday and Saturday evenings, and 2 pm on Sunday. There is plenty of free parking around the theatre, and many opportunities for before-show drinks or dinner in the Cheviot Entertainment District.

Tickets are $15 when purchased in advance, and may be ordered through the 24-hour ticket line at 513.598.8303, or online through the TDW website at http://thedramaworkshop.org. Tickets purchased at the door are $16. Because of strong ticket presales, The Drama Workshop recommends purchasing your tickets in advance.

RUMORS features strong adult language, and is not suitable for younger patrons.

TDW productions have been selected to represent the Southwest Ohio region at the Ohio Community Theatre Association annual conference eight of the last ten years, and presented an excerpt of “Nunsense” at the 2014 state conference. TDW was also honored to represent the state of Ohio at the 2013 American Association of Community Theatre regional conference in Hartford, Wisconsin. The Drama Workshop was recognized in 2013 by the Cincinnati Preservation Association for their efforts to rehabilitate the former Glenmore Bowl into The Glenmore Playhouse.

Prospective members, and individuals or businesses interested in becoming involved or in helping advance TDW’s mission are encouraged to contact the group through our website at www.thedramaworkshop.org, or by phone at 513-598-8303.