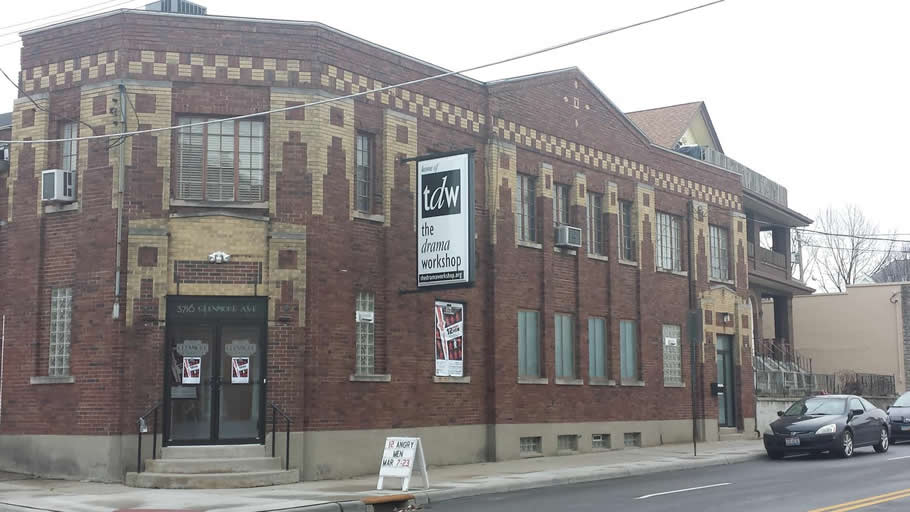 The Drama Workshop, in the heart of the Cheviot Business District, will stage five shows for its 2015-2016 season in its historic 1928 performance venue.

(Cheviot, OH) The Drama Workshop, the award-winning community theatre based at The Glenmore Playhouse in Cheviot, is pleased to announce its five-show 2015-2016 season.

TDW will open the 4th season in The Glenmore Playhouse with the classic musical comedy, “I Love You, You’re Perfect, Now Change”, with book and music by Joe DiPietro and lyrics by Jimmy Roberts, and directed by Linda Abbott. This celebration of the mating game takes on the truths and myths behind that contemporary conundrum known as “the relationship”. The show details the journey from dating and waiting to lovers and marriage, progressing to reveal the agonies and triumphs of in-laws and new-borns, trips in the family car and pick-up techniques of the geriatric set. This hilarious revue pays tribute to those who have loved and lost, to those who have fallen on their face at the portal of romance, to those who have dared to ask, “Say, what are you doing Saturday night?” Show dates are September 11 – 27, 2015.

Following will be the gripping murder mystery, “Deathtrap”, by Ira Levin, and directed by Joe Penno. Sidney Bruhl is a down-on-his-luck playwright, struggling to create his next hit play, when he receives a phone call from a student who tells him he has written the perfect suspense play and will bring it to the playwright’s Connecticut home tonight. Will Bruhl, a master at creating the perfect crime on the page, translate his skills to the real world? Audiences will be on the edge of their seats as the suspense builds: will the playwright will kill the student and take credit for his play? In addition to being a Tony-nominated play, “Deathtrap” was also adapted to a motion picture starring Christopher Reeves and Michael Caine. TDW’s production of this audience favorite will run from October 22 through November 8, 2015.

In December, TDW is proud to present the holiday classic “The Best Christmas Pageant Ever”, by Barbara Robinson, and directed by Ivory Mazur. The Herdmans are the worst kids in the history of the world. They lie, steal, smoke cigars, swear, and hit little kids. So no one is prepared when this outlaw family invades church one Sunday and decides to take over the annual Christmas pageant. None of the Herdmans has ever heard the Christmas story before. Their interpretation of the tale — the Wise Men are a bunch of dirty spies and Herod needs a good beating — has a lot of people up in arms. But it will make this year’s pageant the most unusual anyone has seen and, just possibly, the best one ever. “The Best Christmas Pageant Ever” will have a limited engagement from December 4-13, 2015.

TDW’s Winter 2016 offering will be Paul Slade Smith’s “Unnecessary Farce”, directed by Ray Persing. In a cheap motel room, an embezzling mayor is supposed to meet with his female accountant, while in the room next-door, two undercover cops wait to catch the meeting on videotape. But there’s some confusion as to who’s in which room, who’s being videotaped, who’s taken the money, who’s hired a hit man, and why the accountant keeps taking off her clothes. The plot weaves you through mix-ups and mayhem you won’t believe. This is one funny show you don’t want to miss! Show dates are February 26 through March 13, 2016.

The final show of the 2015-2016 season will be “The Fantasticks”, by Tom Jones & Harvey Schmidt,and directed by Dennis Murphy. “The Fantasticks” is the world’s longest running musical – running for over 50 years in Manhattan and entrancing generations of audiences the world over. “The Fantasticks” is a funny and romantic musical about a boy, a girl, two fathers and a wall. The audience is invited to use their imagination and follow the story into a world of moonlight and magic. The boy and the girl fall in love, grow apart, and finally find their way back to each other after realizing the truth in the words that “without a hurt, the heart is hollow”. The famous score, which includes the classics Try To Remember, They Were You and Soon It’s Gonna Rain, is as timeless as the story itself. Please join us for this very special production, running from April 22 through May 8, 2016.

Season tickets will go on sale in March, 2014. If you would like to be added to the TDW mailing list and receive a season brochure, please leave your contact information at the TDW ticket line at 513.598.8303, or by contacting us through our website at thedramaworkshop.org.

THE DRAMA WORKSHOP was founded in 1954. TDW is a 501(c)3 non-profit organization dedicated to advancing education and promotion of the theatrical arts. The Drama Workshop is widely recognized as one of greater Cincinnati’s most accomplished community theater organizations, garnering dozens of awards annually from the Cincinnati Association of Community Theatres. TDW productions have been regularly selected to represent the Southwest Ohio region at the Ohio Community Theatre Association annual conference, and TDW was also honored to represent the state of Ohio at the American Association of Community Theatre regional conference in 2013. The Drama Workshop recently was recognized by the Cincinnati Preservation Association for their efforts to rehabilitate the former Glenmore Bowl into The Glenmore Playhouse. Prospective members, and individuals or businesses interested in becoming involved or in helping advance TDW’s mission are encouraged to contact the group through our website at www.thedramaworkshop.org, or by phone at 513-598-8303.

News outlets requiring additional information may contact Ms. Gretchen Gantner at 513.470.5516, or by email at groose1876@aol.com.