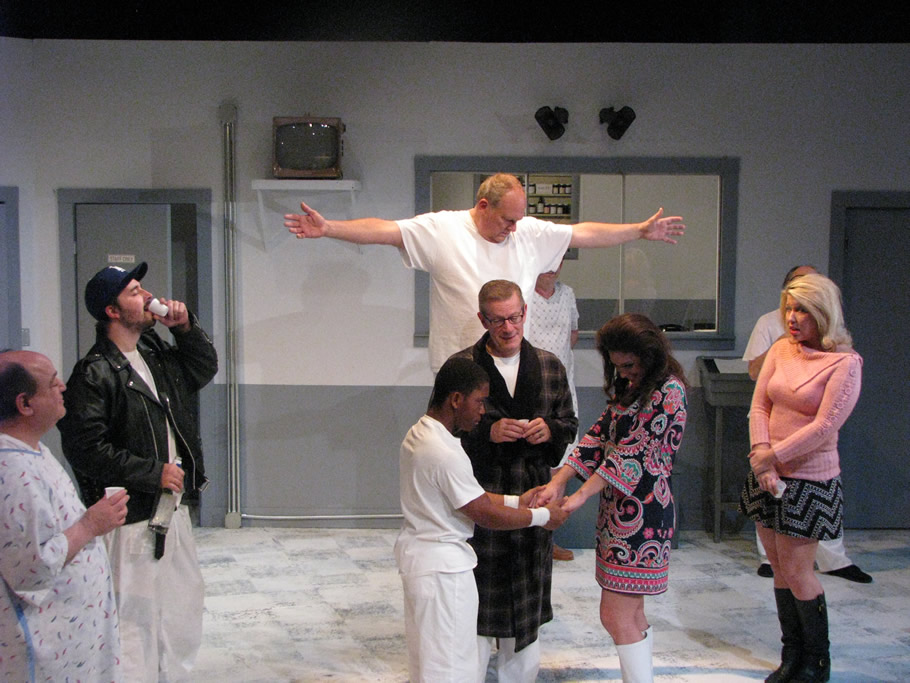 (CHEVIOT, OH) The Drama Workshop’s production of the classic drama ONE FLEW OVER THE CUCKOO’S NEST by Dale Wasserman, based on the novel by Ken Kesey, continues through November 23 at The Glenmore Playhouse, 3716 Glenmore Avenue, Cheviot.

The show opened to enthusiastic audiences the weekend of November 7. The show received a standing ovation Saturday night. Patron Greg Schaper of Blue Ash, said that it was “…the best ticket value in town right now. The casting, the direction, and the acting are simply excellent.” Another patron, Joan Fisher, declared ONE FLEW OVER THE CUCKOO’S NEST a ”wonderful afternoon of art and entertainment” after attending Sunday’s matinee performance.

The cast and crew knew they had something special before the opening. Gretchen Gantner of West Chester, who plays Nurse Ratched, said, “It’s been a real pleasure to work with other actors who are completely dedicated to telling the story. It elevates the work. As we saw the show coming together, we knew audiences were going to love it.”

With an insane asylum standing in for everyday society, this play is a comically sharp indictment of the Establishment urge to conform. Playing crazy to avoid prison work detail, manic free spirit Randle P. McMurphy is sent to the state mental hospital for evaluation. There he encounters a motley crew of mostly voluntary inmates, including cowed mama’s boy Billy and silent Native American Chief Bromden.

The ward is presided over by the icy Nurse Ratched, and Ratched and McMurphy quickly recognize that each is the other’s worst enemy: an authority figure who equates sanity with correct behavior, and a misfit who is charismatic enough to dismantle the system simply by living as he pleases. Also adapted to an Academy Award winning movie starring Jack Nicholson and Louise Fletcher, ONE FLEW OVER THE CUCKOO’S NEST runs the range from hysterical to poignant.