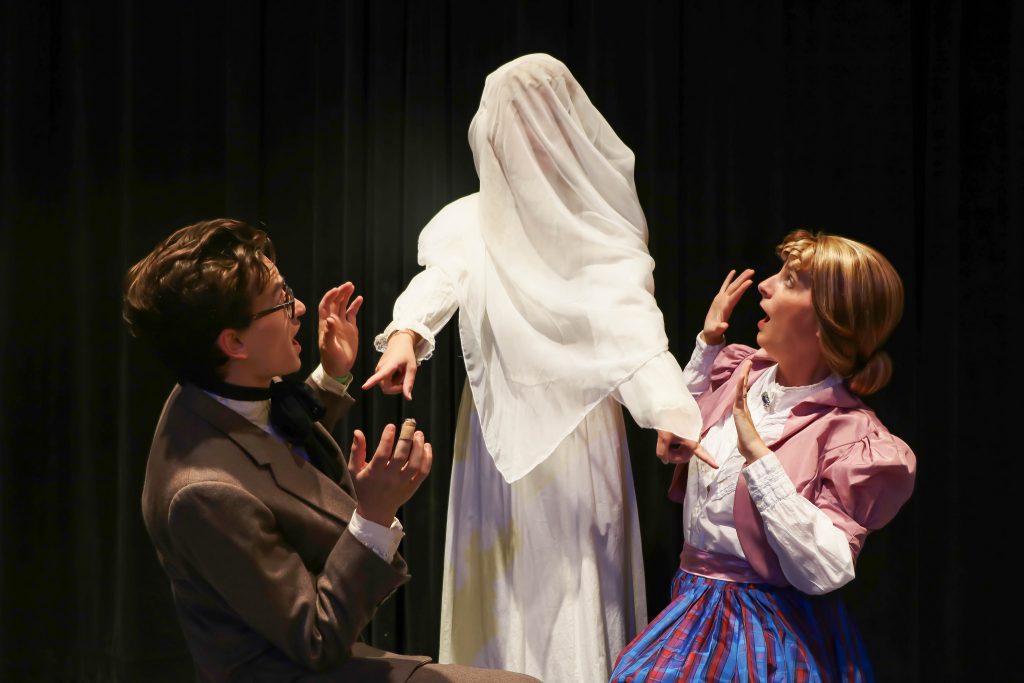 The mysterious ‘Woman in White” (Victoria Kirby-Schwarber) appears to her friends (Aaron Ellis and Elizabeth Hickerson) in TDW’s “Egad! The Woman in White”, a hilarious spoof of a Victorian melodrama.

Cheviot, OH – The Drama Workshop’s 2018-19 season will begin with performances of Tim Kelley’s Egad! The Woman in White, a comedic melodrama to be performed August 10-26. Performances will be held on Fridays and Saturdays at 8 p.m. and Sundays at 2 p.m., with a special Thursday evening performance on August 23 at 7:30 p.m. Performances will take place at The Glenmore Playhouse, 3716 Glenmore Ave., Cheviot, OH 45211. Tickets may be purchased by calling the TDW ticket line at 513-598-8303 or ordering online at www.thedramaworkshop.org.

Egad! The Woman in White by American playwright Tim Kelley is a comedic send up of the classic English Victorian melodrama The Woman in White by Andrew Wilke. The play features both a male and a female villain who conspire to lock a young wife in the madhouse in order to steal her vast fortune. The villain is afraid of only one thing – the mysterious Woman in White – a ghostly figure who seeks him out in order to point an accusing finger at him. Who will win the day – the villains or the virtuous? You’ll find out who while also enjoying period musical performances between the scenes.

Shows at The Drama Workshop frequently sell out, so making reservations early is strongly recommended. Tickets can be obtained by calling The Drama Workshop’s 24/7 ticket line at 513.598.8303, or by ordering online at www.thedramaworkshop.org. Seating is limited, and purchasing your tickets in advance is strongly encouraged.