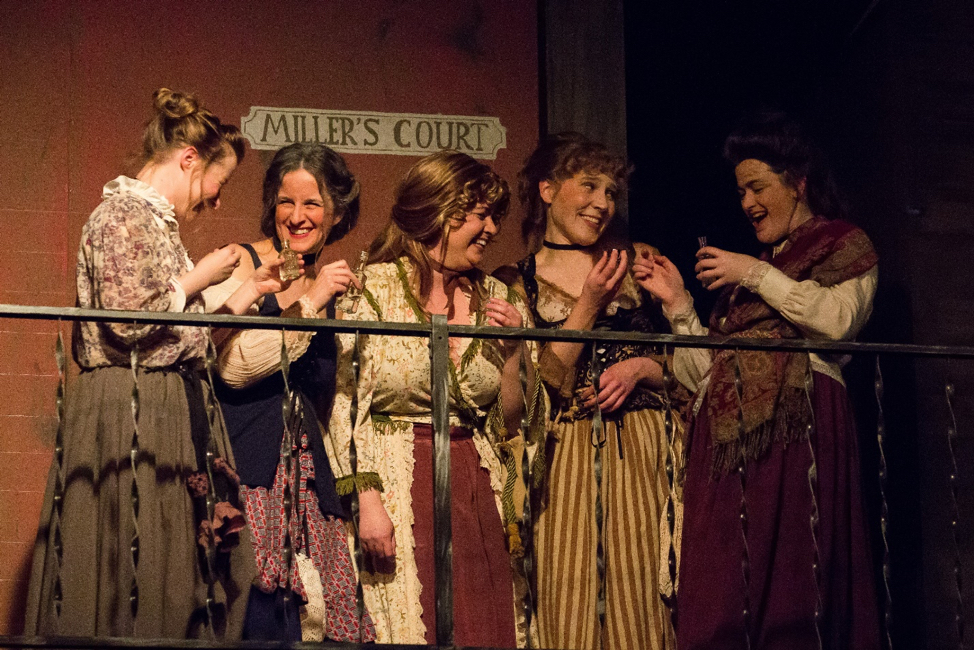 (Cheviot, Ohio) The Drama Workshop has concluded another great year of theatre in its home in the Cheviot business district, setting new records for attendance and critical recognition, and is excited to build on last year’s success as it prepares for its 2018-2019 season.

The group also received a record number of annual awards from the Association of Community Theatres of Greater Cincinnati, with 80 citations for excellence in acting, direction, and other performance and technical areas ranging from scenic design to properties to costuming. This makes the Cheviot-based company among the most widely acclaimed theatre groups in greater Cincinnati.

Among the highlights of the past season was the world premiere of local author Jack Williams’ play, “The Girls of Miller’s Court,” which chronicles the 1888 battle of wits between Jack the Ripper and his intended victims. The show sold out all 9 performances, and brought home 17 awards for theatrical excellence, including for producer Valeria Amburgey, director Jef Brown, and a host of other technicians and actors. The show was named the Cincinnati-region alternate to the Ohio Community Theatre Association state festival to be held in September.

Sold-out performances were not unique to this one show – in the last six years, TDW has seen its attendance increase 300%. Next season, the all-volunteer group is increasing the number of performances for each play to accommodate the increased demand for seats.

Tobie Braverman, TDW’s president, attributes the success of the group to its many volunteers. “TDW can produce quality theatre at an affordable price thanks to all the actors and production crew who commit countless hours simply for the love of live theatre,” she said. “It’s because of them that TDW gets these accolades, and it’s because of them our audiences see consistently great shows. We are extremely proud that the 2017-18 season has continued that trend, and we are excited to move on to the 2018-19 season.”

TDW’s new five-show season kicks off on August 10th, with the hysterical old-style melodrama, “Egad! The Woman in White,” followed by four more shows between October 2018 and May 2019: the American classic, “The Philadelphia Story”; a Christmas-themed musical review, “A Taffeta Christmas”; the thought-provoking “Love, Loss, and What I Wore”; and the inspirational musical, “Working.”

Season tickets are $70 each and may be ordered by phoning the TDW box office at 513.598.8303. In addition to a discount over the regular ticket prices, season ticket holders also receive reserved, preferred seating in what is normally a general seating venue.

In addition to season tickets, single show tickets for “Egad! The Woman in White” are also on sale and can be ordered through the TDW box office. Seating is limited, and reservations are strongly recommended.