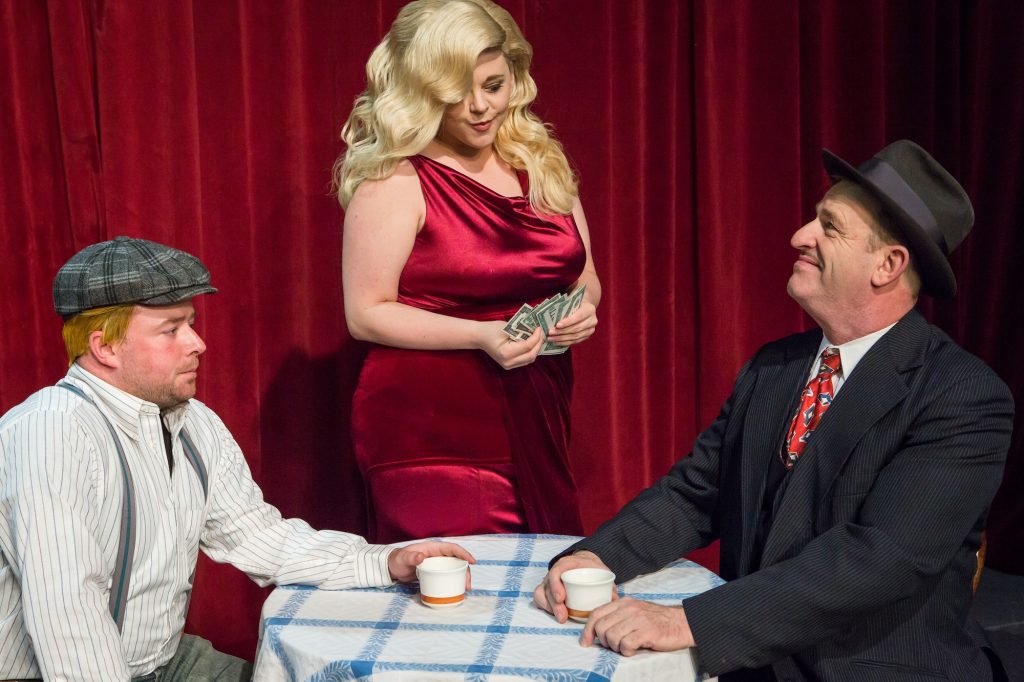 (Cheviot, Ohio) The Drama Workshop is proud to present its stage adaptation of the classic movie ‘The Sting’ to close out its 2017-2018 season. This edge-of-your-seat story of ‘The Big Con’ opens May 4th and runs through May 20th.

Shows are Friday and Saturday evenings at 8 pm, and Sunday afternoons at 2 pm. Because of anticipated ticket demand, a special performance has been added for Thursday, May 17th, at 7:30 pm. All performances are at The Glenmore Playhouse, 3716 Glenmore Ave in Cheviot.

The excitement, maneuvers and comedy of the Paul Newman/Robert Redford screen triumph have been brilliantly adapted for stage production – in 1936 Chicago, small-time grifter Johnny Hooker joins forces with master con man Henry Gondorf to exact revenge on a powerful racketeer. The explosive excitement will have the audience guessing and gasping as it builds to the final con movement.

Amanda Borchers plays Billie, the role made famous by Eileen Brennan in the 1975 film. “Audiences will enjoy The Sting for the same reasons depression- era Americans fell in love with outlaws,” she said. “Within the context of 1930s Chicago, Gondorf and Hooker are modern day Robin Hoods. The characters are engaging and their motivations are oddly pure for a group of gangsters: survival and justice for a fallen friend.”

TDW newcomer Erica Beimesche echoed those sentiments. “The show pays homage to the movie, if you’re familiar with it, but it’s different enough to be exciting to newbies and old fans alike. The cast puts their own twist on each role and brings a fresh energy to a classic story.”
Tickets for ‘The Sting’ are $18, and can be obtained by calling The Drama Workshop’s 24/7 ticket line at 513.598.8303, or by ordering online at www.thedramaworkshop.org. Seating is limited, and purchasing your tickets in advance is strongly encouraged.