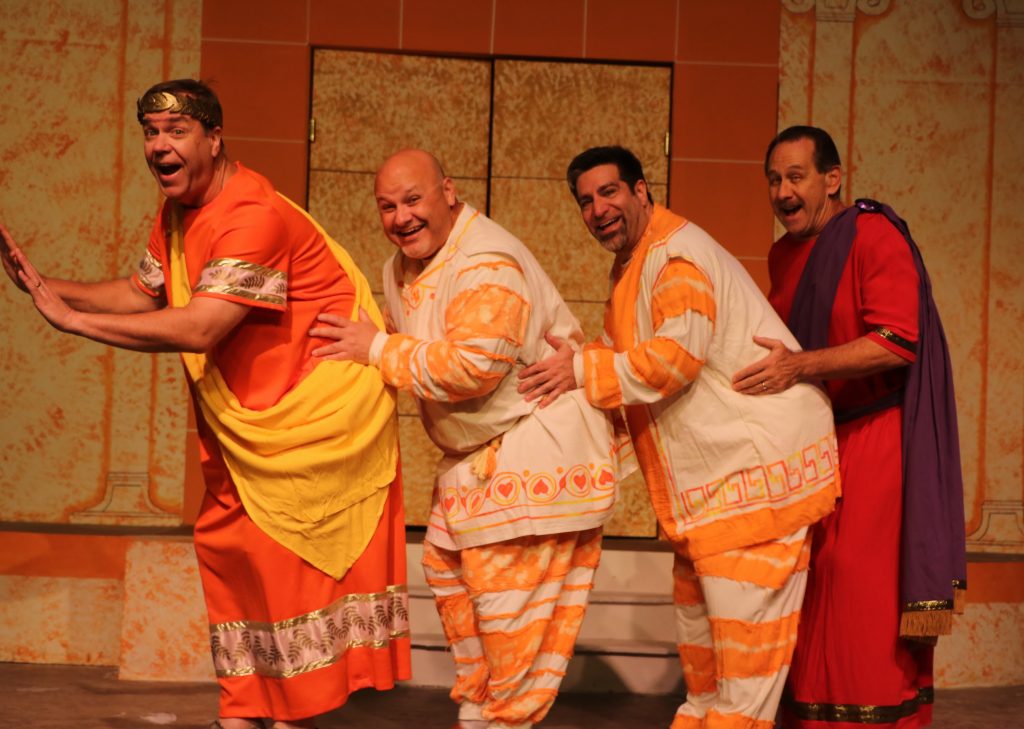 The Drama Workshop opens its exciting 2017-2018 theatrical season with the classic musical comedy, “A Funny Thing Happened on the Way to the Forum.” This Tony-award winning comedy is sure to thrill audiences with its combination of slapstick humor and toe-tapping songs.

The production opens August 11, and runs through August 27 with performances on Friday, Saturday, and Sunday for three weekends, with an added Thursday performance before the final weekend. Sunday performances begin at 2 pm; all others begin at 8 pm. All performances are at The Glenmore Playhouse, 3716 Glenmore Ave in Cheviot.

Inspired by the farces of ancient Rome, the musical tells the bawdy story of a slave named Pseudolus and his attempts to win his freedom by helping his young master woo the girl next door. The show is filled with puns, slamming doors, cases of mistaken identity (frequently involving characters disguising themselves as one another), and satirical comments on social class. The title derives from a line often used by vaudeville comedians to begin a story: “A funny thing happened on the way to the theater.”

The musical’s original 1962 Broadway run won several Tony Awards, including Best Musical. “Forum” has enjoyed several Broadway and West End revivals and was made into a successful film starring the original lead of the musical, Zero Mostel.

Jon Vater is a newcomer to the TDW stage, but is no stranger to theatre, being a regular performer at the Stained Glass Theatre in Newport. “As a child of about ten, I saw the movie on local television one afternoon and its lunatic plot-line caught my attention,” he explained. “I was startled by the actor who played Miles Gloriosus as he was so brawny and basso profundo, never dreaming that one day I would not only sing and act myself, but step into that very part!”

TDW veteran Victoria Covarrubias plays the courtesan Tintinubula, and says she’s thrilled to be part of such a diverse and talented cast. “I love participating in TDW productions because it’s fun and it’s truly a group effort,” she said. “Everyone is really welcoming and accepting and works hard, but we always have a good time. The show itself is a timeless story of love and mistaken identities. How could anyone help but love it?”
Vater agreed with her, adding “The story is just simple, slapsticky, door-slamming fun with no agenda. It’s a way for audiences to leave all cares at the door and just watch the frantic tale as it spirals into further craziness while also enjoying some fun music. Its goal is to put a smile on one’s face rather than to change the world.”

TDW productions are frequently been selected to represent the Southwest Ohio region at the Ohio Community Theatre Association annual conference, including this past season with a production of “Aways…Patsy Cline”. TDW was also honored to represent the state of Ohio at the 2013 and 2017 American Association of Community Theatre regional conferences. The Drama Workshop has been recognized the Cincinnati Preservation Association for their efforts to rehabilitate the former Glenmore Bowl into The Glenmore Playhouse.

Prospective members, and individuals or businesses interested in becoming involved or in helping advance TDW’s mission are encouraged to contact the group through our website at https://thedramaworkshop.org, or by phone at 513.598.8303.