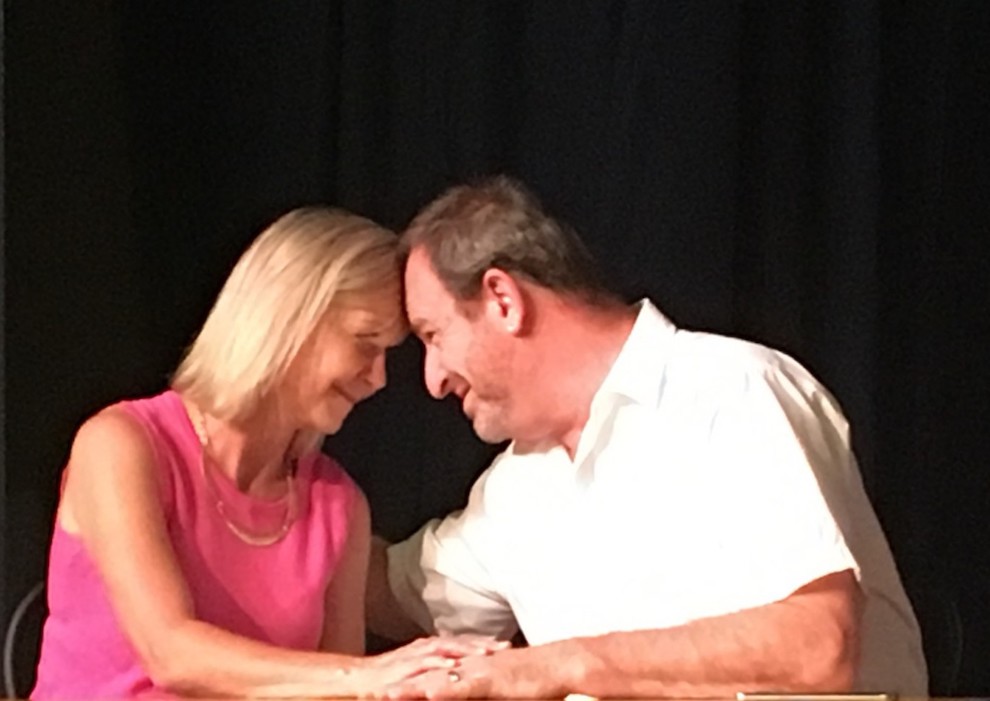 The Drama Workshop welcomes all those who enjoy good beer and good theatre to Home Brew Theater, running June 9 through 11. The collection of six short plays includes Peggy Allen and Chris Bishop in “Smoking” by Herb Duval. (Kat Reynolds image)

(Cheviot, Ohio) The Drama Workshop is thrilled to present HOME BREW THEATER, an event featuring six new plays and locally brewed beer June 9-11. Performances will be June 9 and June 10 at 8 pm, and June 11 at 2 pm at The Glenmore Playhouse, 3716 Glenmore Ave, Cheviot. All proceeds benefit the Glenmore Playhouse Fix-the-Roof-Fund.

This program is an event unique to The Drama Workshop. The six short plays are all locally written; the playwrights are a combination of people returning from last year’s well-received inaugural HOME BREW THEATER, and newcomers. The 10 minute short-plays make for a fun and fast-moving evening of entertainment. Each performance will be followed by a reception for ticketholders with beer provided by the Christian Moerlein brewery.

The plays, authors, and casts are:

FIRST LOVE by Alan Jozwiak, with Mary Vosseberg and Sam Kerns: breaking up is hard to do.

NOT BAD NEWS by Angela Forbes, with Ray Persing, Gretchen Gantner, and LeAnna Homandberg: what do you suppose is their daughter’s big announcement?

SMOKING by Herb DuVal, with Chris Bishop and Peggy Allen: sometimes, you have to get their attention first!

ESCAPE2FUN by Clint Bramkamp, with Jazz McMullen and Victoria Garcia: Richard and Ellie might get somewhere if it wasn’t for the interruptions.

I QUIT by Betsy Bossart, with Peyton Hahn, Jeffrey Surber, Emily Brinkman, Roxanne Millman, Amy Waldfogle, and Jim Bussey: who knew it could be so hard to quit a job?

The shows are directed by Kat Reynolds, and produced by Clint Bramkamp.

Seating is limited, and reservations for this unique event are strongly recommended. Tickets are $12 each, and may be ordered by phone at (513) 598-8303 or purchased online at thedramaworkshop.org.