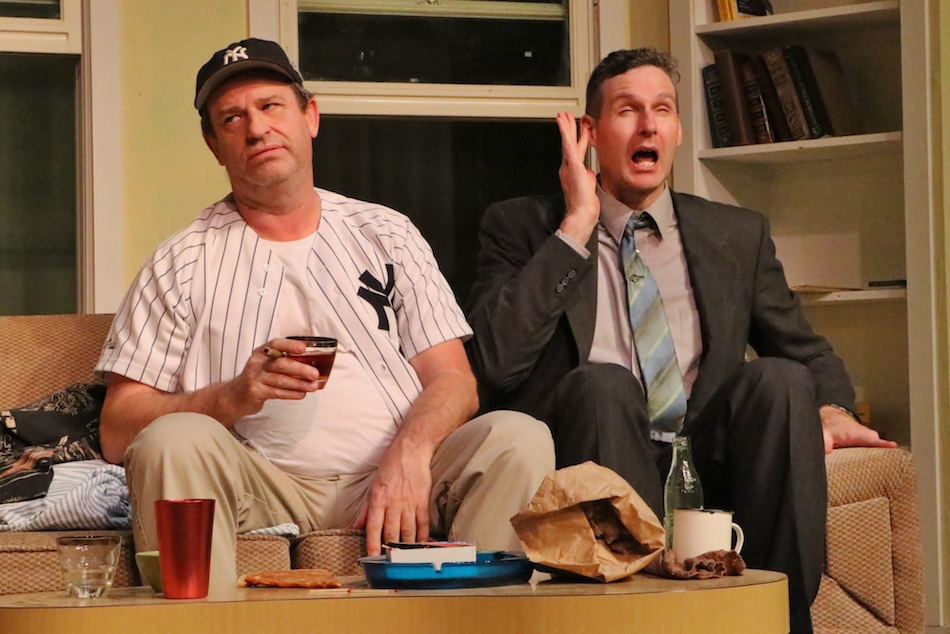 Oscar Madison (Chris Bishop) begins to realize that Felix Ungar (Eric Thomas) may be too much for him to take in The Drama Workshop’s production of Neil Simon’s “The Odd Couple”, opening February 24. (left to right: Chris Bishop, Eric Thomas. Kristy Rucker image.)

“The Odd Couple” arrives at The Drama Workshop

(Cheviot, OH) The Drama Workshop’s production of Neil Simon’s timeless comedy, “The Odd Couple” is playing February 24 through March 12 at its theater in Cheviot at 3716 Glenmore Ave. Showtimes are 8 pm on Friday and Saturday evenings, and at 2 pm on Sunday afternoons, with an added performance on Thursday, March 9 at 7:30.

Divorced, broke, and sloppy sportswriter Oscar Madison is doing all right – having split from his wife six months ago, he has nobody to answer to. He also has nobody to clean up after him, and his Manhattan apartment shows it, to the dismay of his poker buddies who come over every Friday night. But when his best friend, neat-freak Felix Ungar gets thrown out by his own wife, Oscar takes him in. It doesn’t take him long to realize that he and Felix make a rotten combination – how can they live together without driving each other crazy?

Eric Thomas plays the role of Felix Ungar, and says that he was drawn to the role because of its place in American theatre. “In a few short pages Neil Simon creates these true comedic archetypes. When you think of the great comedic characters of the 20th century, Oscar and Felix have to be right up there with Chaplin’s Tramp, Lucy Ricardo, Barney Fife, or Archie Bunker.”

The character of Oscar Madison is played by TDW veteran Chris Bishop, who explains that he channeled his Navy experiences as the roommate of a slob to help flesh out his portrayal of Oscar. “The opportunity to put my own spin on such an iconic character as Oscar Madison, and to work with the others in this cast has been fantastic,” he said. “They are nothing short of amazing!”

Director/producer Ray Persing cites the timeless nature of the show’s central theme as to why he has wanted to direct the show for many years. “Oscar and Felix approach life very differently, and the conflict this creates is what drives the comedy. But the soul of the play is that despite their differences, they do love each other – and in the end, it’s all that matters. It’s why, after over 50 years, ‘The Odd Couple’ is still relevant.”

To order tickets to “The Odd Couple”, please either order online at thedramaworkshop.org, or via the 24/7 ticket line at 513.598.8303. Performances are at The Glenmore Playhouse, 3716 Glenmore Ave, Cheviot, 45211. Ticket prices for the show are $16 in advance, or $17 the day of the show. Seating is extremely limited, and some performances are close to sold out. Discounts are available for groups of 10 or more.