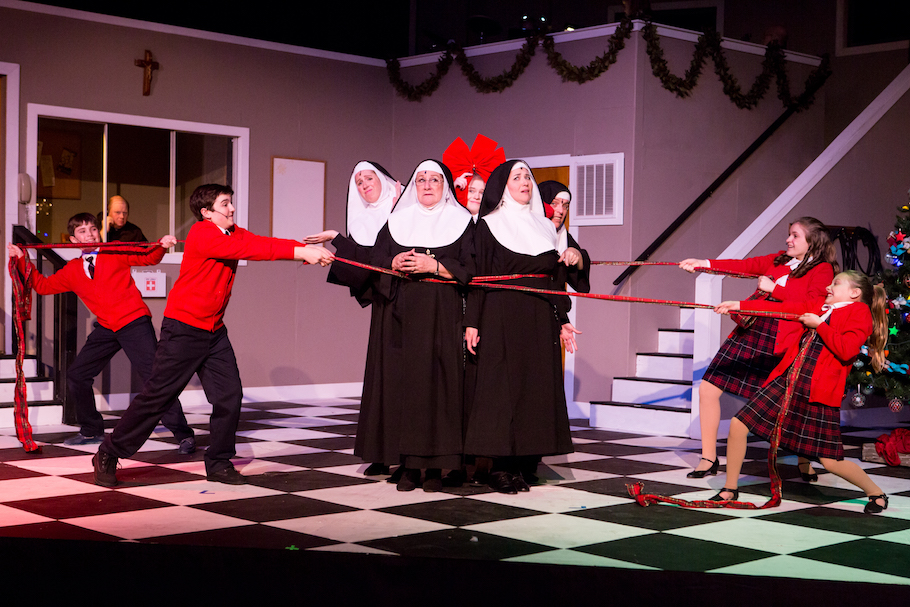 (Cheviot, OH) The Drama Workshop’s production of Dan Goggin’s “Nuncrackers” is bringing a holiday treat to its theater in Cheviot at 3716 Glenmore Ave. Showtimes are 8 pm on Friday and Saturday evenings, and at 2 pm on Sunday afternoons through December 18.
The hilarious sequel to TDW’s 2014 production of “Nunsense” features The Little Sisters of Hoboken’s first TV special taped in the Cable Access Studio built by Reverend Mother in the convent basement. It stars the nuns you love, plus Father Virgil, and four of Mount Saint Helen’s most talented students. Featuring all new songs including ‘Twelve Days Prior to Christmas’, ‘Santa Ain’t Comin’ to Our House’, ‘We Three Kings of Orient Are Us’ and ’It’s Better to Give than to Receive’, this show is filled with typical “Nunsense” humor, some of your favorite carols, and a “Secret Santa” audience participation.

Among the characters are Sister Robert Anne and Sister Mary Hubert, played by real-life sisters-in-law Amy Waldfogle and Michelle Shaffer. While both have been involved in community theatre for many years, this is the first time they’ve ever appeared on stage together.

Amy convinced Michelle to audition when the actor originally cast as Mary Hubert had to drop out of the production. “This is the first time I’ve ever had the opportunity to spend time with Michelle that didn’t also involve other family members,” she said. “It’s actually a big part of why I encouraged her to audition, to get that opportunity.”

Michelle agreed, “I see her with some frequency at family events, but have never done a proper show with – it’s nice to get some one on one we’ve never really had.”

While Amy has worked with TDW before, this is the first show that Michelle has done with the 62-year-old theatre company. “My experience with TDW has been really nice. Everyone’s been very welcoming and it’s really nice working with a group that has their own space. I haven’t gotten to do that much.”

Amy introducing Michelle to TDW mirrors something that Michelle did for her years ago. “Michelle is largely responsible for the existence of my family. She and my now husband met during the same show where Michelle met my brother,” she explained. “The cast bonding from that show led to a “gang” that continued to hang out together….which is how Michelle got to know Greg…..and a few years later, she invited me to the birthday celebration outing for this guy named Mark, as a chance to see some people I knew while I was in town for Christmas.”

Mark and Amy are now married, with a daughter. Amy grinned, “So the whole “theatre is one big family” idea is definitely demonstrated in our world.”

To order tickets to “Nuncrackers”, please either order online at www.thedramaworkshop.org, or via the 24/7 ticket line at 513.598.8303. All performances are at The Glenmore Playhouse, 3716 Glenmore Ave, Cheviot, 45211. Ticket prices for the show are $16 in advance, or $17 the day of the show. Seating is extremely limited, and some performances are already sold out. A discounted prices is available for groups of 10 or more.